Lithium rich ceramic pebbles are required for tritium breeding in future fusion reactors like ITER. The pebbles will be installed in the form of pebble beds in the wall of the reactor and upon irradiation, will generate tritium to be used as a fuel for the fusion reaction. A melt-based process has been developed at the Karlsruhe Institute of Technology, Institute for Applied Materials, which produces pebbles from the break-up of a molten jet. Synthesis powders are heated in a platinum alloy crucible to approximately 1400 °C, after which a pressure is applied to the system, forming a jet through a nozzle on the underside of the crucible. The jet then breaks up while entering a cooling tower, where the droplets are solidified using a liquid nitrogen spray system.

At IAI, camera-based methods for analyzing the production of lithium ceramics are being developed and implemented at the facility. A high-speed camera system with telecentric optics is used. By means of newly developed image processing methods, various properties of the beam as well as the lithium pebbles can be calculated online directly at the point of origin and used to control the process. 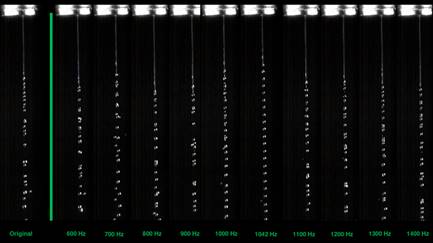